My cupcakes -- it's happened. What everyone said would happen, happened.

No, I didn't try to perform a cutting-edge scientific experiment that would teleport me from one side of a room to another, only to have it go horribly wrong and turn me into a human fly. (It's interesting that so many of you thought this would happen to me. You guys are weird.)
Nor have I been kidnapped and sold into sex slavery as Mama Kim predicted would happen if I took a taxi by myself. (That's because every time I get into a cab I tell the driver, "I would not make a good sex slave, okay? I am really, really lazy in bed. So don't even think about it. Now please take me to the hospital.")
Nor have I become an alcoholic. The day I choose Jack and Coke over lasagna, that's the day you have an intervention.
Stop guessing already. You're really bad at this.
What's happened is -- drum roll, please -- I have fallen irrevocably, paralyzingly, prehistorically in love with someone. I hope he's not reading this, because I'm about to gush and he might start running for the hills if he realizes how much I am into him.
(This is a tangent, but why are people so turned off by people who like them a lot?)
It's not like I'm collecting his dead skin cells and replicating them in a petri dish. (Note to self: Don't do it, Hana. Your first intuition is correct -- that's fucking creepy. Plus, if you can't even teleport yourself without turning into a human fly, what makes you think you can clone him? You silly Korean.)
It's like, I-want-to-be-his-baby-factory serious. It's like, clean-his-poop-with-my-bare-hands-if-we-went-to-Mexico-and-he-got-Montezuma's-Revenge-and-pooped-all-over-the-bed-and-my-favorite-shoes serious. It's fucking lose-the-weight-and-keep-it-off-forever serious. Do you understand the words that are coming out of my mouth?
You know you're in love when tastes are tastier, smells are smellier, colors colorier. When clichés are reborn as the truest poetry and corny lovesongs sound like a chorus of angels. When his face is the only one you see when you lay down to sleep at night, his name the only one on your lips when you wake to God's glorious morning, and his presence a gift every golden moment in between.
It's not just because he's smoking hot. He's also the kindest soul I've ever met. He's funny, thoughtful, altruistic, attentive, curious, family-oriented, spiritual, physically active, German... (I would continue, but if he's reading this I don't want him to think I'm signed, sealed, and delivered. Patrick, if you're reading this, you still have to work for it, okay?)
Guess the fuck what? He also loves dogs, children and Christmas. $!@*#*! That's like, enough for me to claim him as my soulmate. It sounds like I'm joking, but I'm not. That's scary shit right there.
There was a time (not long ago) when fear would not let me fall this hard. I would bypass any situation that might cause me pain and began thinking that I might never fall in love again. But this one figured me out. He asked me if we could just cuddle one night. And I quote in a German accent, "I would like to sleep with you. Very chaste, maybe just some cuddling, if that's okay." WTF? All my defenses melted right there. He wouldn't let me keep him in the friend zone. He patiently presented himself to me slowly and respectfully.
I think he might be a serial killer.
In other (but still slightly related) news, I bungy-jumped off the Auckland Harbour Bridge a couple weeks ago. I remember standing at the edge and marvelling at the effect of so much fear on my body. My knees shook and swayed uncontrollably, like palm trees in a hurricane. Instead of bone and cartilage, they were composed entirely of Jell-O™. But I jumped, man. I let myself fall. 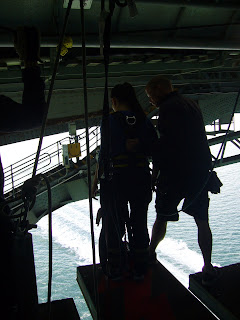 I'm letting myself fall in love. Because it's the most amazing feeling in the world. And if shit doesn't work out, I'll be absolutely devastated. But I'll be alive. Because I'm never bungy jumping again. That was fucking dangerous.
Your favorite ragamuffin,